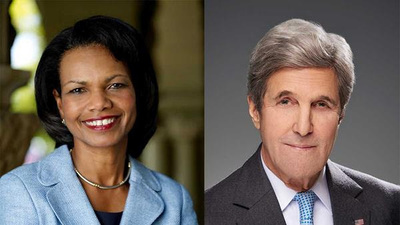 The University of Notre Dame’s International Security Center (NDISC) and Rooney Center for the Study of American Democracy, together with Common Ground Committee and BridgeND (a chapter of BridgeUSA), will host former Secretaries of State Condoleezza Rice and John Kerry.

The forum will take place from 7 to 8:30 p.m. and will be moderated by Howard LaFranchi, diplomacy correspondent for The Christian Science Monitor. The event is free and open to the public but requires ticket reservations.

“We look forward to a fascinating and productive conversation between Secretaries Rice and Kerry, two experienced leaders in American foreign policy,” said Christina Wolbrecht, professor of political science and director of the Rooney Center. “The Rooney Center and our partners are delighted to bring this unique and exciting dialogue to Notre Dame to educate and inform the campus community, as well as contribute to pressing national policy debates.”

In 2014, then Secretary of State John Kerry unveiled the official portrait of former secretary Rice — a Notre Dame alumna — at a White House ceremony that the Associated Press called “a rare display of bipartisan civility.” With many studies and surveys showing that the U.S. population has become more politically divided, civil discourse has taken a hit.

“It is a privilege for NDISC to partner with the Rooney Center, BridgeND and the Common Ground Committee to host this timely and essential discussion of what should be the new common ground for American foreign policy moving forward,” said Michael Desch, professor of political science and director of NDISC. “Such a conversation rightly begins with elder statespersons like former Secretaries of State Condoleezza Rice and John Kerry but eventually will have to include different and younger voices as well. There is no better place to bring them all together than Notre Dame’s campus.”

In keeping with the Common Ground Committee mission of “bringing light, not heat, to public discourse,” CGC co-founder and chief executive officer Bruce Bond emphasized the importance of leaders having civil, productive conversations.

“Secretaries Rice and Kerry have consistently represented the country’s better instincts on discourse,” Bond said. “Despite working for administrations that had very different views on foreign policy, attendees of this event can look forward to a robust but civil conversation between these two leaders as they provide insight and find common ground on America’s role in the world.”

BridgeND was founded on the belief that democracy depends on the ability to engage with opposing viewpoints in a civil manner.

“Secretaries Kerry and Rice are both exemplars of BridgeND’s mission, and we are thrilled to help bring these two distinguished speakers to Notre Dame’s campus to demonstrate the possibilities of constructive discourse,” said Christian McGrew, former president of BridgeND and current executive board member of BridgeUSA.