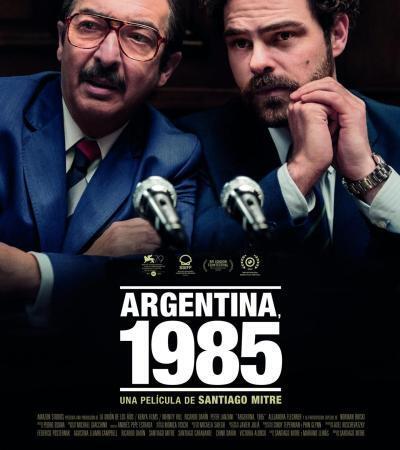 Please join us for a screening of the film on Sunday, February 12, at 4:00pm.

This event considers the recently released film "Argentina, 1985" – which depicts the transitional justice process that took place in Argentina after the military dictatorship – with inter-disciplinary scholars providing commentary on this historic moment, followed be a Q&A session.

More than 30,000 Argentines were estimated to have disappeared between 1976 and 1983, and some 3,000 officials and non-officials have been charged with crimes as of 2018. The film provides a dramatic depiction of the groundbreaking transitional justice trial, a process that has set precedents for human rights litigation, created awareness around the limits of state power, and influenced peace-building mechanisms after human atrocities. “Nunca mas” (“Never again”) has shaped the historical memory of older and younger Argentines, and material reparations are available still today, as the country continues to recuperate from the legacy of state violence.

Cosponsored with the Department of Romance Languages & Literatures and the Kroc Institute for International Peace Studies.